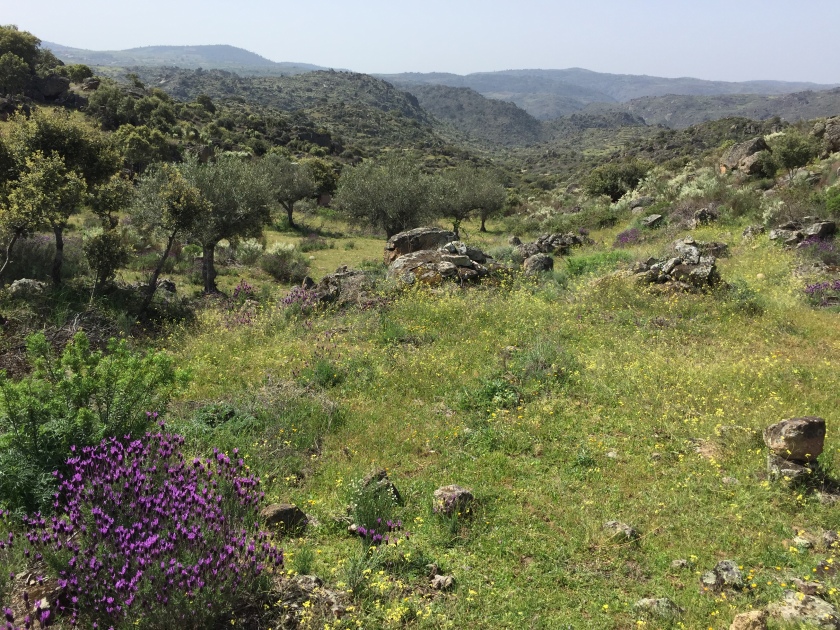 In mid-April I travelled to Western Iberia to visit the Faia Brava nature reserve (Portugal) and meet some of the people responsible for it. The name means ‘wild cliff’ in the Portuguese spoken in this remote, achingly beautiful area. The organisation managing the area, the Transhumance and Nature Foundation (ATN), was started in 2000 by biologists that wanted to protect the nesting areas of Egyptian Vultures and Bonelli’s Eagles. They did so by buying former agricultural land where eagles were nesting, along the Côa river Valley, in Guarda District, and vesting the land management in the foundation. Since then, ATN has evolved into an ambitious organisation that wants to create natural spaces through habitat restoration on abandoned agricultural land and connect these spaces through ecological corridors that animals can use to move around freely. Faia Brava is still its largest reserve, at 1000ha, acting as a flagship for the wider project.

There is a long way to go before a sizable chunk of the Iberian Peninsula is friendly towards wildlife, but ATN is well on its way to trying. It has partnered with Rewilding Europe to help achieve their common vision of wide-scale, deep nature restoration. Besides protecting, and feeding, raptors and scavengers, together with its partners it aims to reintroduce the Iberian Wolf and connect currently isolated populations, to reintroduce the Iberian Ibex, and to recreate Mediterranean forests managed by wild grazers. The grazers in question – horses and aurochs – are extinct, so ATN is also working on new versions of these animals to replace the lost ones. Locally, the image of aurochs, wild horses, and Ibex reaches back in time to the Palaeolithic and survives in thousands of masterfully executed rock engravings along the Côa Valley, in what is now a 20.000ha archaeological park.

ATN has a lot on its plate and, as always with complex projects, the distance between goals written on paper and results on the ground is significant and populated by all sorts of conundrums and every-day decisions. The overarching strategy that guides the organisation’s decisions is the so-called “stepping-stone” strategy, meaning that ATN focuses primarily on buying land and creating Faia Bravas in miniature (the stepping-stones) that it can eventually connect. The result would be a wide area of privately owned, recreated wilderness. All of the above aspects of ATN’s work deserve careful discussion, and I will come back in future posts to some of the main ones. In this post I want to focus on one particular phenomenon – fire – that nicely exemplifies the difficulties and conundrums of rewilding in cultural landscapes.

Portugal has a fire problem. Last year, for example, a sizable chunk of the country burned to the ground in June and October. From the distance that ignorance affords, I always assumed that fires in Portugal were natural. The term wildfires, usually used to describe burning land, suggests that the phenomenon is somehow independent of human will. To my astonishment, I learned that there are hundreds of independent ignitions in Portugal every month, which means that either this is the unluckiest country on Earth, under a constant shower of cosmic sparks, or that fires are deliberately started, with frightening frequency. Guarda district is not spared the yearly purge, and the history of ATN, a local organisation first and foremost, is itself dotted with fire events.

The ‘transhumance’ in the name of the organisation refers to the tradition of moving flocks of animals from pasture to pasture throughout the year, in order to have access to sufficient food, year-round. In the beginning, ATN was committed to also protecting traditional agricultural and pastoral practices, together with eagle’s nests. It had to re-examine its commitments when, in 2003, Faia Brava burned in a devastating fire likely started by one of the shepherds allowed to graze his flock inside the reserve. The shepherd’s act was the most traditional thing he could have done: the Côa Valley has been managed by humans with fire since the prehistory poignantly etched in its rocks. ATN still works to maintain some agricultural practices, like olive picking, within its properties, but it has decidedly turned its back on this long-standing tradition of burning: one of the main actions of ATN today is in fact post-fire forest restoration.

Burning land favours one thing above all others, namely the sprouting of grasses. This is why pastoral people have used it for millennia, as an easy way of transforming a complicated environment not entirely suited to livestock into a vast feedlot perfectly suited to them. Mature and diverse forests are more resilient to fire events than monocultures, grasslands, or landscapes dominated by shrubs. The problem is that in the time it takes to restore a mature forest – several decades – it is very likely that a fire will set the clock back to zero. In ATN’s first stepping-stone, the Ribeira do Mosteiro reserve, a fire last year decimated the slopes that were finally starting to fill in with trees.

Besides shepherds, there are many others in Portugal that stand to benefit from fires. Having a state contract for putting fires out is a lucrative business in a country with still few economic opportunities. And seeing how burning has been part of the land from time immemorial, it stands to reason that many simply accept its presence. Besides the potential loss of property and lives, the only reason to oppose it is if you are interested in habitat restoration. ATN is therefore carefully working with local inhabitants to change their perception of fire from a normal part of the landscape to a problem that can be remedied. This is slow work, and it only takes one spark to undo the efforts of decades.

The relationship between ATN and fire is emblematic of a wider tension arising when nature conservation and cultural conservation goals are mixed. The mix is unavoidable in a European context, and particularly in a Portuguese one, where the vast majority of the land is privately owned in small plots. Trying to create spaces for natural processes to work by themselves, as ATN and Rewilding Europe try to do, necessarily involves also making space for uses of the land that potentially impede rewilder’s preferred natural processes. I see it as a sign of increasing maturity that, at this point in ATN’s life, it no longer tries to have its cake and eat it too. And this might be an important lesson for nature restoration and rewilding elsewhere: certain cultural practices, regardless of their impeccable pedigree, are incompatible with ecological goals. Simply because something has occurred for a long time is no reason to preserve it. Inasmuch as widescale natural restoration is the goal, it can be pursued through a reinvention of cultural practices, and not necessarily through their preservation

Seen this way, rewilding is an experimental practice on both the ecological and cultural dimensions. The Côa Valley is composed of dizzyingly numerous layers of nature and culture and their changing interactions. Rewilding the valley is then the latest in a series of experiments going back 20.000 years. The nostalgia for what is potentially lost can only be soothed by the promise of what is to be gained: a rich natural environment that challenges people to learn how to live without depleting it. The challenge of recreating rich natural environments is considerable, but the one of reinventing human practices such that natural diversity can be maintained is even greater. It is, at this point, a hypothesis that significant numbers of people can live in proximity to high ecological diversity: in the process of testing it in practice, fighting fires is a crucial cultural stepping-stone.